Boeing had probably hoped the 16th of December 2009 would be bright and sunny. Unfortunately it was a dull and grey overcast day when its newest aircraft, the 787 Dreamliner took to the skies in its inaugural flight. The media was there en masse, reporting to the world about a revolutionary new plane built with new materials and cutting edge technology that would be the most efficient commercial aircraft in the world. 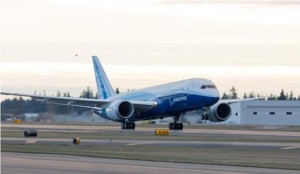 But despite the celebration, journalists also reported the fact that the Dreamliner took off over two years late and well over budget. Delays plagued the development of the plane which started back in 2004 and has resulted in lost orders and a reputation battering for Boeing.

This story is a great current example for product managers – ultimately, the Dreamliner is a product, albeit with a $150+ million price tag. In this post we review the aircraft in the context of product development and innovation and we invite you to share your thoughts and comments too.

With a development budget estimated at anywhere between $10 – $15 billion, the arrival of the Dreamliner is the result of a significant product development process, one that involved challenging many of Boeing’s existing models, principles and assumptions.

Boeing’s arch-rival Airbus had invested in the safer strategy of “a bigger version of what we’ve already got” with its A380 designed for traditional hub-and-spoke international flights. The Dreamliner was based on a completely different principle – a smaller but still long-range aircraft that would serve point-to-point routes. Boeing based this decision on the global trend for increased flight connections between smaller cities pointing out that city pairs have increased by more than 3,500 since 1990.

“Our strategy has been to design and build an airplane that will take passengers where they want to go, when they want to go, without intermediate stops; do it efficiently while providing the utmost comfort to passengers; and make it simple and cost-effective for airlines to operate,” said Marty Bentrott, vice president of sales, marketing and in-service support in an interview with Forbes magazine.

Most commercial aircraft are examples of incremental innovations, whereby a new model is simply a refinement of earlier models. This strategy is low-risk and seeks to improve competitiveness on known factors. The Boeing 737 for example, first introduced in 1968 is now into its 9th iteration, with relatively minor variations and enhancements being made to size, engines, fittings and onboard entertainment.

The Dreamliner on the other hand was a departure from previous models and can be described as an example of radical innovation. This form of innovation is about taking risks, challenging assumptions and reinvestigating what customers want.

Taking inspiration perhaps from the iPod, Boeing first referred to it’s new concept aircraft as the 7E7 – the E was never formally explained but was interpreted as environment or efficiency. Why? For one thing, 60% of the materials used to make it are composite fibres rather than traditional alumnium. Great efforts were made to develop fibres with the strength and endurance equivalent to metal but with significantly lower weight. Advanced software was used to give it a unique and very aerodynamic shape. The challenge was also put out to engine manufactures to build ultra efficient engines that could make the aircraft suitable for long haul flights.

The Dreamliner’s chief project engineer Tom Cogan referred to this sum of innovations in an interview with Design News “I would have a hard time saying any one is the single biggest innovation. In an airplane like this to be successful, it is a collection of those. It’s all of them as a system together that make the difference.”

A network of complexity

Boeing’s proposition for the Dreamliner was based on increasing value to customers in two ways: by reducing operational costs and enhancing passenger experience.

Unlike its earlier models, manufacturing of the Dreamliner was heavily outsourced to firms all around the world with components being built in France, Japan, Italy, Australia, Finland amongst others. These components were shipped and flown back to Boeing for final assembly.

This approach delegated responsibility, development cost and some risk and it allowed for industry leaders to build the components. Some analysts describe this outsourcing model as the most innovative aspect of the Dreamliner. But it was not without problems.

Boeing was now reliant on a network of suppliers scattered around the world each of whom was focused primarily on their own outcomes – they had to deliver what was required on time and within their own budget constraints. The complexity involved in project managing such a vast network led to confusion and delays. Often, one supplier was forced to wait for another to provide a component. This pushed out timeframes and led to overall project delays.

Some very public examples of the issues were reported, including many problems with integrating components, concerns about the safety and strength of wings and fuselage components, a shortage in documentation from suppliers and problems with the aircraft’s software.

Unions were not happy that so much of the aircraft’s manufacturing had been outsourced and Boeing was faced with additional delays due to industrial action. Boeing announced continued delays regularly citing that it needed “just three more months” and it pulled out of the July 2009 Paris Air Show to resolve yet more issues.

Unsurprisingly Boeing’s arch-rival Airbus capitalised on this negative PR by flouting its A380 and highlighting the development of its own product offering to compete with the Dreamliner, the Airbus A350-XWB. An Airbus executive congratulated Boeing yesterday while touting their own product saying “The first flight of the 787 underscores the continual advancements in commercial aircraft that come about because of healthy competition. We look forward to a continued robust rivalry with our A350 XWB”.

Your flight is delayed

Facing criticism from some about the safety and reliability of the composite materials, Boeing has gone to great lengths to assure its customers. It has even gone so far as to launch the 787 GoldCare program, an after sales type maintenance service that is usually provided by third parties. Whilst Boeing will charge for this service, it does place an additional strain on the manufacturer as it now needs to develop the resources and capabilities to manage an ever increasing fleet of aircraft.

Recent concerns have focused on Boeing’s difficulties in the plane coming in overweight which reduces its range and thus its environmental credentials are being challenged. Boeing has one year to complete testing and scale up its production efforts before delivering its first aircraft late next year.

Despite criticism, Boeing is optimistic regarding the Dreamliner and importantly, airlines are excited too with 840 aircraft already on order.

Product development is often challenging. Identifying a market opportunity, defining a product concept and then managing its development are all significant tasks.

Is it inevitable that massive product development projects over-run their budgets suffer from scope creep and end up way off schedule? Undoubtedly Boeing has a great set of engineers, designers and employees all of whom had a vested interest in seeing the project reach its goals on time and on budget.

We’d like to hear your thoughts. There’s nothing worse than waiting for a late plane. Why do you think the Dreamliner took off late and over budget? And what could have been done to keep it on schedule.